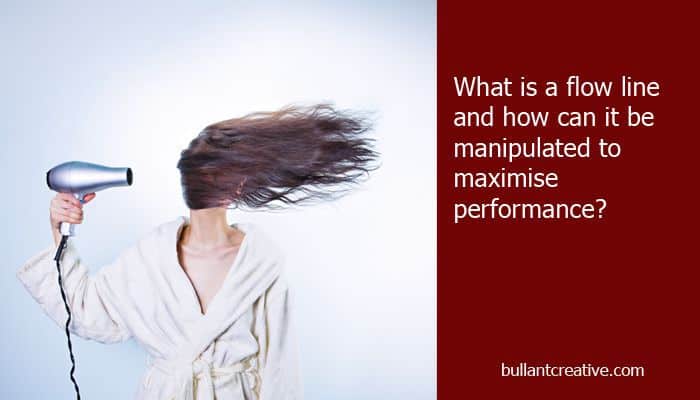 Capacity decisions made at the time of asset procurement have a huge strategic effect on the long term competitiveness of a manufacturing operation. This is particularly true in the process industry where most of the factories use Flow Lines.

In this article we explain how flow lines are designed as well as the supply chain system benefits of un-balancing flow lines, i.e. adding extra capacity upstream and downstream of a flow line’s bottleneck.

Paced Assembly Line – In a paced assembly line, parts flow through the line on a belt or a chain that moves at a constant speed. The parts move through zones that usually contain one or more operators. The line is designed so that the operators will almost always be able to complete their task while the part is moving in their zone. If not, the line would be disrupted as workers tried to finish tasks in the next worker’s zone.

Hence the bottleneck of a paced assembly line is not the slowest station in the line but the line-moving mechanism itself.

Flow Line – In a flow line, stations are essentially independent. Each station operates at its own speed, so the bottleneck is the slowest station on the line. In a flow line, the tasks carried out by operators depend more on the machines themselves and less on the labour pool assigned to the machines. To increase capacity at a particular station, we must either add an additional machine to that station or speed up the existing ones. (Taken from “Factory Physics – Third Edition”, by Wallace J. Hopp and Mark L. Spearman, Waveland Press, 2008)

A balanced flow line is shown below. It is characterised by the equal capacity of machines or workcentres along the flow line. Quite often a line has been created as a balanced line becase it was the least cost option.

In this balanced flow line it is pointless having any work in progress (WIP) between the machines because they serve no beneficial purpose. If a machine stops for any reason then the WIP position before it will increase. Once that machine restarts it will not have the additional capacity to draw down on the upstream WIP making the WIP redundant. (Note: it’s a bit harsh to say that the WIP serves no purpose but we are trying to illustrate a point) 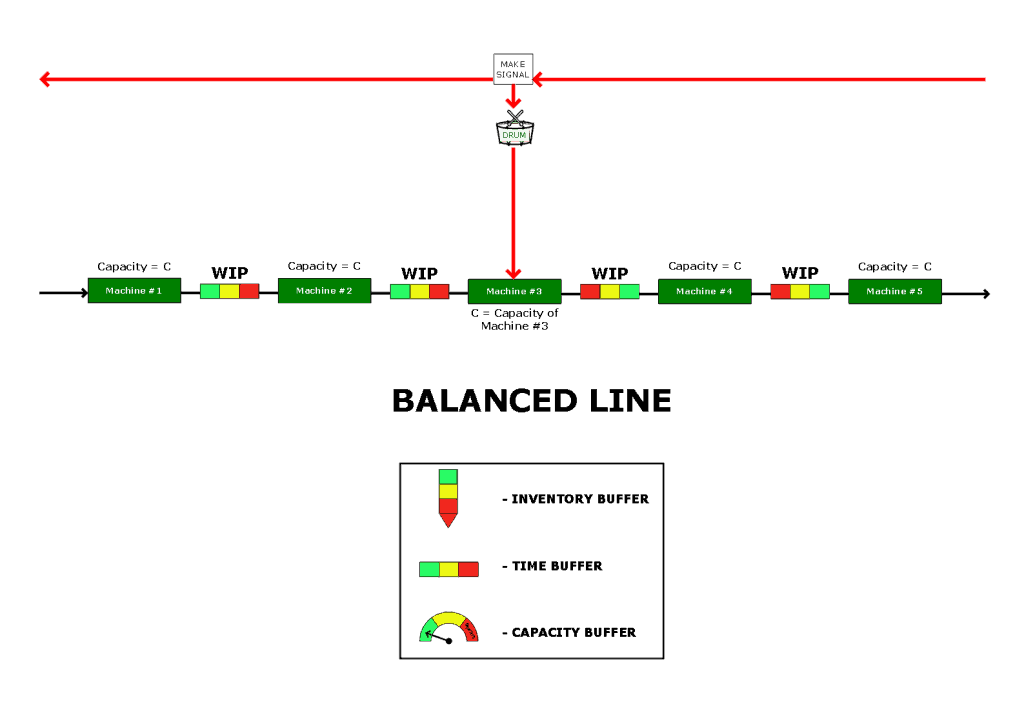 If, on the other hand, we look closely at our balanced flow line we may discover an opportunity to increase the capacity of some of the machines without a significant increase in cost. Machine #3 is the most crucial and expensive machine so we decide that this must be the bottleneck and designate it as the “Drum“. The resulting un-balanced flow line is shown below.

With this work we have now created a line with different performance characteristics. The WIP positions can now operate effectively because there is enough additional capacity in the machines upstream and downstream of machine #3 to draw down on the buffers after stoppages.

There is some science associated with sizing the capacity and the WIP (time) buffers to make this work (statistical modelling may be required) however this set-up serves to “subordinate” all resources towards machine #3. That is to say that machine #3 can essentially be isolated from upstream starvers and downstream blockers.

Flow lines are designed on a spectrum between completely balanced to completely unbalanced with a number of issues involved in the trade-off analysis. There are a number of reasons why the optimum flow line generally tends to unbalanced in most situations;

Some of our Clients